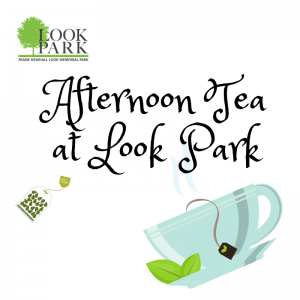 Join us in 2019 once a month at Look Park for Afternoon Tea! Each monthly tea will feature a different speaker or activity.  Tickets are $10.00 per person and reservations are required. Teas will take place at the Garden House during the colder months. As the weather gets warmer, we will move outside. For questions or reservations, please call 413-584-5457.


1pm to 3pm at the Garden House

A performance by  the Easthampton Music Conservatory

Located just off the Williston Northampton Campus in Easthampton, Massachusetts, the Easthampton Music Conservatory offers exciting private and group lessons to musicians of all ages and abilities. Their teachers are the finest in the valley, and value collaborative efforts to provide excellence in musicianship at all levels and in many styles.

Join us on May 15th at the Garden House to enjoy an hour long performance by the Easthampton Music Conservatory. Stay after to enjoy refreshments and mingle!

1pm to 3pm at the Pines Theater

A performance by the Northampton Community Music Center

1pm to 3pm at the Dow Pavilion

Trick Training Your Dog with Caroline Moore from Animal Alliances

Exploring the History of the Quabbin with J.R. Green

J.R. Greene, a life long resident of Athol, is a graduate of the University of Mass – Amherst. He is the author of 21 books; sixteen relating to the history of the Quabbin Reservoir and the towns destroyed to build it, three relating to the life of Calvin Coolidge, and two on Mass. railroads. He is chairman of the board of directors of the Friends of Quabbin (and their member of the Quabbin Watershed Advisory Council) , and the Quabbin – Ware River Watersheds representative on the Metro Water Resources Advisory Board.

The narrated slide program lasts a little over an hour, and relates the story of how the Metro Boston Water system reached out to take the Swift River valley to build the Quabbin Reservoir.  The towns and villages destroyed to build it are shown, and what life in them was like.  The author will have copies of his books on sale (autographed upon request) at the program.

1pm to 3pm meeting spot to be determined

During the last 150 years, the 130-acres that make up Look Park have undergone a series of transformations–from farm fields and pasture to golf course to park. On this walk around the park, Historic Northampton co-director and naturalist Laurie Sanders will help reveal the park’s history and how it’s revealed in the  landscape and plants and animals we see today.
Limited to 25.

An illustrated talk on Mrs. Coolidge’s roles as educator, wife, mother, citizen, humanitarian, First Lady of this city, state and nation. Learn about her love of baseball, animals and her community.
Julie Bartlett Nelson holds a MSLIS in Archives Management and MA in History and has been the archivist at Forbes Library since 2004 working with the Coolidge Museum and the Hampshire Room for local history and genealogy.  Make an appointment with her for Coolidge research, start your family tree or get advice preserving your family photos.

A History of Apple Growing in New England with Russell Powell